Whenever you start a program or open a file or folder on your computer, they open in what’s called a window (which is how Windows gets its name).
Normally the window will fill your computer’s screen (fullscreen), which is generally what you want.

But it doesn’t have to. In Windows 10 and Windows 11, you can resize the program window to take up just half the screen, a quarter of the screen, or to be just about any size you want. You can also move the window around on your screen, top left, bottom right, or anywhere else you want it to be.

Resizing and moving program and file windows around your screen allows you to have (and work on) more than one program at a time. It’s extremely useful to know how to do it.

The key to resizing a program window is understanding how the Minimise, Maximise and Restore Down buttons work.

Whenever you open a file, folder, program, app or anything that you’re doing beyond the desktop, you’ll see 3 buttons in the very top right-hand corner of the window.

To the far right is the Close button (the X), which I’m sure pretty much everyone knows about.

Just to the left of the Close button are the Minimise, Maximise/Restore Down buttons.

The Minimise button is the easiest to explain because it only has one job, and that is to send the open window (program) to the Taskbar. Clicking the Minimise button doesn’t close the program, nor does it stop the program from doing whatever it’s doing. The window is simply moved out of your way.

You can tell when a program window is minimised because an indicator line appears underneath its icon on the Taskbar.

When a window is Minimised, it hasn’t closed. You won’t lose anything you’ve been working on or doing. The program is will continue to do whatever you set in motion. It has simply been moved out of the way.

And if you hover your mouse pointer over a minimised window icon, you’ll see a preview window pop up. To return the minimised window to its original size, either left-click on the preview pop up or the program’s icon.

When you’ve minimised several folders, as you hover your mouse over the folders icon on the taskbar, you’ll see each folder appear as a preview.

To restore a given folder, simply click the one that you want.

This is where moving and resizing windows really comes into its own. Let’s say you’re trying to compare which files are in two different folders. Maybe you’re organising your pictures or documents. Rather than have to constantly “jump” from one folder to the other, you can have both folders open, side by side, at the same time.

It’s also much easier when shopping on the Internet, you can have two web browser windows open, side by side, allowing you to compare prices, specs, delivery etc, between different suppliers.

But I’m getting a little ahead of myself, first, we need to look at how the Maximise/Restore Down button works.

The Maximise button actually has two functions, Maximise and Restore Down.

While the Maximise button is pretty much self-explanatory, the Restore Down button does require a closer look and it’s also very slightly different depending on whether you’re using Windows10 or Windows 11.

When you click the Restore Down button, the window (for whatever program, file or folder you’re looking at) will resize itself, it’ll get smaller. And you could be forgiven for thinking that the size it goes to is entirely random. But it’s not, it’s actually quite precise.

Whenever you Restore Down a window, it will return to the size, shape and position on the screen that it was in the last time it was Restored Down.

Restore Down Button In Windows 11.

If your computer is running Windows 11, then the Restore Down button has an extra function.

If you hover your mouse pointer over the Restore Down button, you’ll see a block of shapes appear. Clicking on any of these shapes will automatically resize and position the window according to which shape you clicked.

Which allows you to quickly and automatically have multiple windows open and visible on screen at the same time.

The option to have a window automatically take up a size and position from the Restore Down button is only available for Windows 11 users.

If you’re using a Windows 10 computer, you won’t see those options when hovering your mouse over the button. However, it’s really easy to achieve the same effect by manually moving and resizing the windows. Which is really what this guide is all about.

In both Windows 10 & 11 when a program window is in the Restore Down position, you can move it around the screen. You can position the window anywhere you want it to be by dragging and dropping it.

To move a window, put your pointer onto the top bar of the window. Then hold down the left mouse button. Move the mouse around the screen and the window will follow.

When you release the mouse button, the window will stay where it is. This action is called Dragging and Dropping. You drag the window to a new location and drop it there.

Now that you can put a window into the Restore Down position and you can move the window around on the screen, how do you change the size and shape of it? How do you resize a program window?

To resize a program window, it needs to be in the Restore Down position. So click Restore Down if you haven’t already. Then move your pointer to the very edge of the window, and you’ll see the arrowhead change to a double-headed arrow.

When the double-headed arrow appears, hold down the left mouse button and then move the mouse. You’ll see the window re-sizing as you move the mouse.

Although Windows 10 doesn’t have the automatic resizing options that are available by hovering your mouse over the Restore Down button in Windows 11, you can very quickly achieve the exact same results.

By resizing and then moving your program windows around the screen.

A Program Always Starts (Opens) In A Small Window.

Sometimes you’ll get a program that always seems to start or open in a small window, in the Restore Down position. But you’d prefer to have it start (or open) in a Maximised (fullscreen) window. It’s not a huge deal, but gosh darn it, it can be annoying when it keeps happening.

Keyboard Shortcuts To Resize And Move A Window.

Most of us will use the computer mouse to do virtually everything except for typing. But there are keyboard shortcuts to get things done quickly and easily, and resizing a program window is no exception.

While there are many more keyboard shortcuts than the ones I’m going to show you here, these are perhaps the most useful. These shortcuts work in both Windows 10 and 11.

This one is perhaps the most useful, to make a window “Snap” to either the right or left-hand side of the screen.

Press the Windows key and either the right or left arrow key depending on which way you want the window to go.

The top window will automatically “snap” or resize itself to take up half the screen.

In this way, you can quickly have two windows side by side.

Using Keyboard shortcuts isn’t going to suit everyone, especially if you’re using a separate keyboard and mouse. But if you’re working from a laptop and using the touchpad, then these shortcuts really can help to make your life just that little bit easier. It just takes a bit of practice.

If Restore Down Doesn’t Seem To Work For You.

You might think that Restore Down is broken or there’s something wrong with your PC, but most likely it isn’t. There are two good reasons for program windows not resizing after you click the Restore Down button.

The second reason could be that Windows is in tablet mode. Tablet mode is specific to Windows 10, the feature has been withdrawn from Windows 11.

In this short video, I’ll show you how to deal with both issues, starting with the Restore Down window being too large.

Knowing how to resize and move program windows around your screen is a great skill to have. It really is incredibly useful. And Ok, so having several windows on the screen at the same time is a bit much, but having two windows open is more than manageable, especially on larger screens. In essence, you’re splitting your screen.

As a simple example, let’s say you’re looking to buy something online. A TV, a holiday, a new bike, or whatever. Different websites will be selling either exactly the same thing or something very similar.

Having two browser windows open side by side would allow you to easily compare each site directly, rather than popping in and out of each one.

Maybe you need to compare what pictures you’ve got in two different folders on your computer, open both folders and resize them side by side. Now it’s easy to see what’s in each folder.

Resizing a window isn’t something you’re going to be doing every day, but all the same, it’s well worth knowing how to do it. 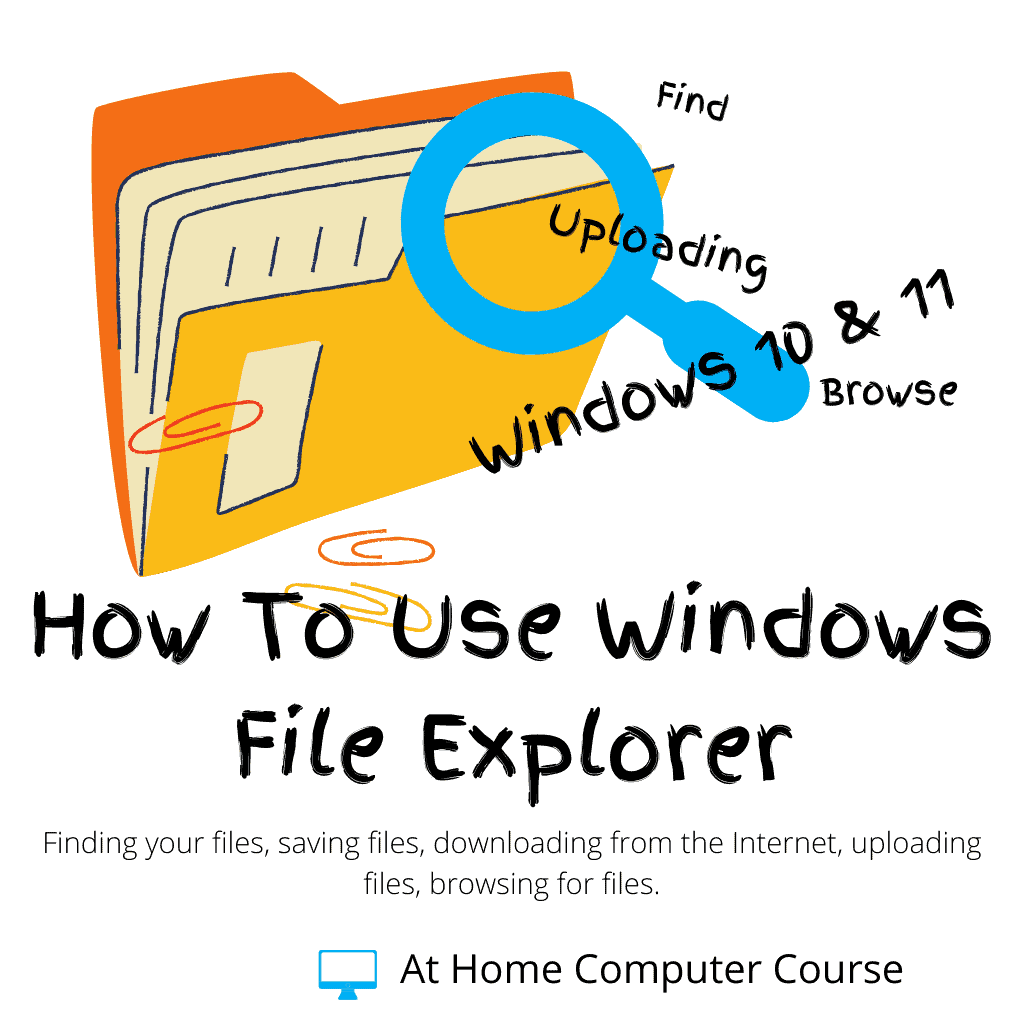 Whenever you open a folder, save a file, download a file, or simply search your computer for a particular file, what you’re using is Windows File Explorer.

Whenever you open a folder, save a file, download a file, or simply search your computer for a particular file, what you’re using is Windows File Explorer.

Next Page
Scroll to Top